While the use and popularity of Twitter is on the decline, it's by no means gone. The channel is still widely utilized by brands and personalities (i.e. President Trump) the world over.  Though there are tons of sites where you can discover examples of the brilliance that lies in Twitter campaigning, today we’re going to talk about the sad, ironic, and funny moments that brands on Twitter could not have failed any worse.

The time that McDonald’s lost their own hashtag game

In 2012, McDonald’s attempted a hashtag campaign they called #McDstories. The idea was to introduce the public to some of the farmers who provide the company with food items to make their products.

Yeah, until tweets like these started popping up on the web: 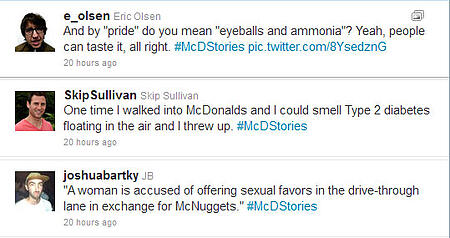 McDonald’s promptly tried to remove their association with the hashtag—but they soon found out that Twitter can’t be controlled in that way.

Sorry, McDonald’s! Major tweet fail. And apparently they didn't completely learn their lesson as they lost another Tweet battle to Wendy's in 2017:

Today we've announced that by mid-2018, all Quarter Pounder burgers at the majority of our restaurants will be cooked with fresh beef. pic.twitter.com/Bdf99ALlxw

.@McDonalds So you’ll still use frozen beef in MOST of your burgers in ALL of your restaurants? Asking for a friend.

The time that Kenneth Cole forgot about sensitivity

In February of 2011, when Egypt was going through a moment of severe political upheaval, the designer tweeted:

The Twitterverse promptly backlashed at Cole, citing his tweet as insensitive in a serious situation.

Cole later apologized via tweet, but I don’t think anyone will be forgetting that one anytime soon.

The time that Chrysler had a dirty mouth

2011 seems to be a year of bad tweet-iquette because in March of 2011 Chrysler had a very profane tweet fail mix-up of their very own. 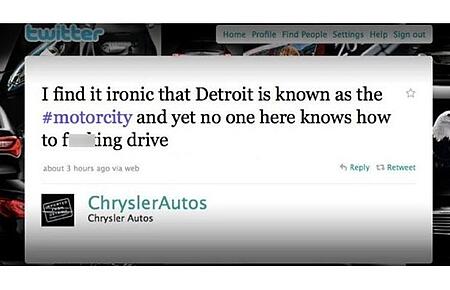 The tweet, which was quickly removed, was supposedly sent from an employee of the Chrysler Company. They later confirmed the tweet was actually from a member of their agency, New Media Communications, whom they would not be renewing their contract with come the following year.

The time that Urban Outfitters was sort of guilty

Urban Outfitters faced a lot of scourge when they were called out via Twitter for stealing the designs of small business owners, such as the ones for this necklace line.

The company’s response to the situation? 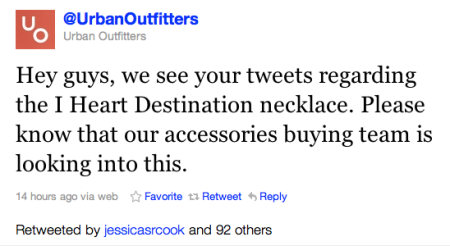 The public was not pleased. Within a few hours, the company had lost 17,000 followers and the trending hashtags were #UrbanOutfitters and #thieves.

The time that Bing marketed a natural disaster

Everyone probably remembers the tsunami-hurling mega-earthquake that hit Japan in 2011. The country was left devastated, and relief efforts for the Japanese were off the chain.

MSN’s Bing was no different in jumping aboard to help the cause. But when they dropped this slightly sales-y donation raising tweet, many raised their eyebrows: 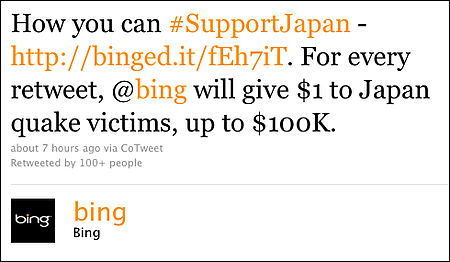 Most people thought this was a strange way to go about upping brand presence.

I mean, can you blame them?

The time when the American Red Cross got “slizzerd”

The American Red Cross made headlines in yet another 2011 Twitter mishap when one of its employees accidentally posted this tweet onto the company account instead of their personal one: 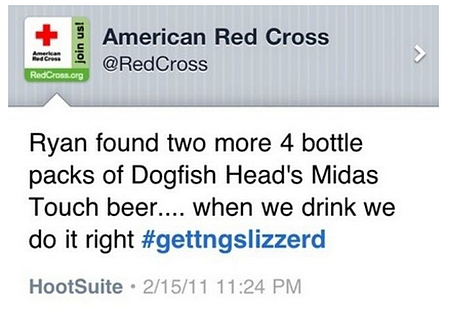 Though this tweet fail gave most of us a few laughs, the company did recognize the unprofessional nature of the tweet and apologized to their followers with this witty number:

And, finally, the time that KitchenAid insulted the President

Of all of the tweets we’ve seen today, there’s probably nothing as notorious as the one we’re about to see next.

During one of the 2012 presidential debates, kitchen appliance super-brand KitchenAid posted this horribly offensive tweet fail: 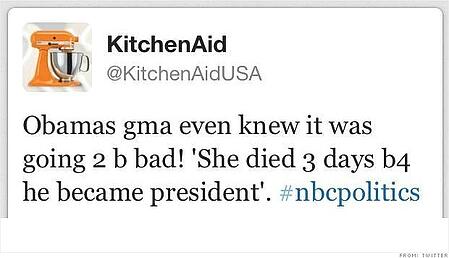 Needless to say, KitchenAid had to do some serious damage control after dropping that bad boy.

Apparently, KitchenAid was also victim to one of its employees confusing company and personal accounts.

The errant tweet was removed promptly and the Senior Director of KitchenAid, Cynthia Soledad, then took to the company’s account to publically offer the company’s apologies to President Obama.

Moral of the story…

As much as we might believe that things like Twitter are designed to help blow off some steam, it’s clear that social media is not a free for all… especially when you’re a big name company like the ones mentioned above. Sure, there will be accidents (some funnier than others) but ultimately, keep your eyes peeled and fingers swift when posting something to your personal/company accounts. You never know when a tweet fail may strike.

If you want to read on some further social media mishaps (and how to avoid them) check out this earlier post.

Did we miss any tweet fails? Tell us about them by commenting below :)

Several years ago, Periscope, a live video streaming app, made its way onto the social media market. The platform, which...
By Campaign Creators
Nov 18 read