This digital credentialing platform makes creating and sending branded, secure and verifiable digital badges and certifications possible, all around the world. 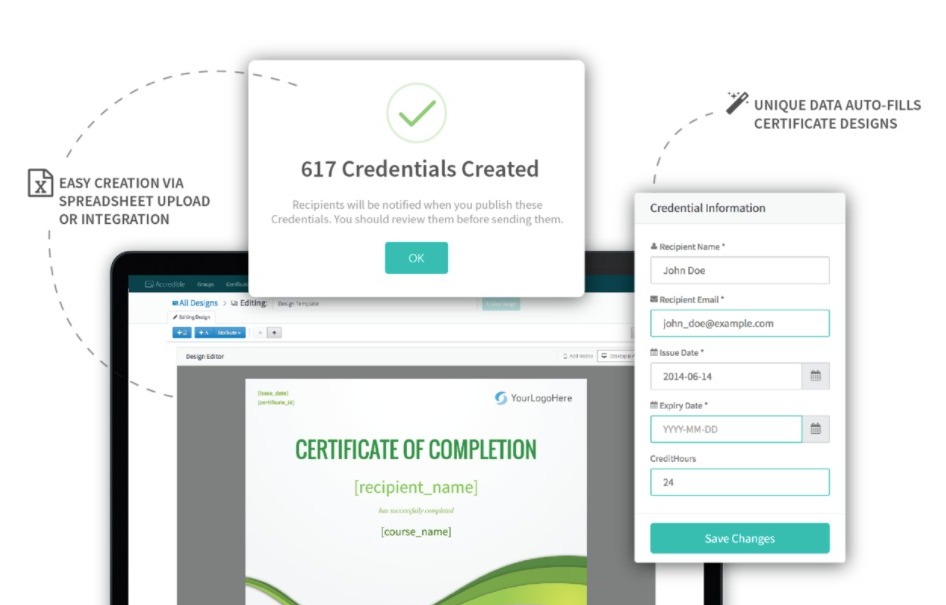 Of Influenced Revenue Generated in 1 Month.

An industry-leading, digital certification company found Campaign Creators amidst their skyrocketing contact and lead generation efforts. While this may sound like great news for most marketers, Campaign Creators identified an issue. The company's exhaustive buyer personas list was eating up their team’s time as they were trying to target so many audiences. While having multiple buyer personas helped generate new leads, this wasn’t the most sustainable lead generation strategy in the long run.

The certification company needed help handling this high volume of leads, and nurturing them all the way to a transaction. They were leaving money on the table between not having automation, optimized premium assets, or a comprehensive lead nurturing strategy.

All of these needs stood between the company and their vision, but one hurdle in particular set the tone for the entire project: Their lack of resources. Their team was pressed for time due to their small size and long list of priorities. Marketing on their own just wasn’t in the cards, at least not right away. The certification company needed a method for launching marketing campaigns that had longevity, but without time-consuming constraints.

Campaign Creators was ready to put their certified digital marketing skills to the test. Their goal for the certification company was centered around launching automated campaigns that funneled their developed contact base down an effective lead nurturing journey.

They needed a method for segmenting, nurturing and converting their leads in the right way, at the right time. With that comes many individual projects, such as developing attainable buyer personas, appropriate messaging, increasing brand awareness, and ensuring a contact will actually move through their buyer’s journey.

All of these goals held promise if the certification company could first develop a strong communication plan. Given that an average of eight touch points is usually responsible for driving a single sale, expanding the number of touch points, in combination with the company's goals, would bring them remarkably closer to the sales they’ve always dreamed of.

Campaign Creators examined the certification company’s plethora of buyer personas, and discovered different contacts were being segmented by small differentiators. Campaign Creators consolidated those separate, complex buyer personas into one, making it easier and more effective to develop universal messaging. This iteration to the company's marketing and lead generation strategy immediately helped them save time, while still having their contacts engage just as frequently.

Campaign Creators built out the breadth of the certification company’s lead nurturing efforts with a fool-proof lead nurturing email campaign. This provided them the ease of “selling” without all the manual work. How, you ask? Through automation and an increased amount of touch points through email. These emails allowed readers to become familiar with their brand (not just their product), download premium assets, and learn more about the value the certification company offers. This was quintessential to driving their sales.

With every marketing campaign delivered, Campaign Creators provided easy-to-use templates the certification company could customize or repurpose in the future. If they wanted to institute a new lead nurturing campaign, they are now able to do so with the templates provided. The certification company not only got the ball rolling on their lead nurturing efforts, but were given the opportunity to extend those efforts on their own down the road.

After just one month of launching the certification company's revised lead generation and new lead nurturing campaign, they were already seeing killer results.

Their new email campaigns attributed to 22.8% of their email traffic since June 2017. New contacts alone made up 21.1% of all contacts who came from email marketing, and 14.3% of new contacts during June became customers within the same month. The average email click-through rates were 4.1% (well above industry average), and of those who made it to the landing page, 20.4% of them converted! Such a high conversion rate from new contacts is indicative of proper messaging, an appropriate amount of touch points, and, of course, a great product.

Regarding the lead nurturing email campaign alone, 0.39% of contacts were enrolled in the TOFU (top of the funnel) in this series. Of the contacts that engaged with the initial emails, 5.39% moved into the MOFU (middle of the funnel) series. And finally, the BOFU (bottom of the funnel) brought 6.25% of leads through the email series. This reinstates that the more you nurture contacts down an educational journey, the more qualified traffic you’ll get within each level.

And finally, what did the certification company get out of this from the perspective of their bottom line? Well, 165,356 contacts were influenced, $72,675.02 of attributed revenue was acquired, and 765 deals were closed. In a short amount of time, Campaign Creators cert—ainly provided the certification company with an arsenal of marketing tools—from the right messaging, to helpful templates, to time-saving automation.