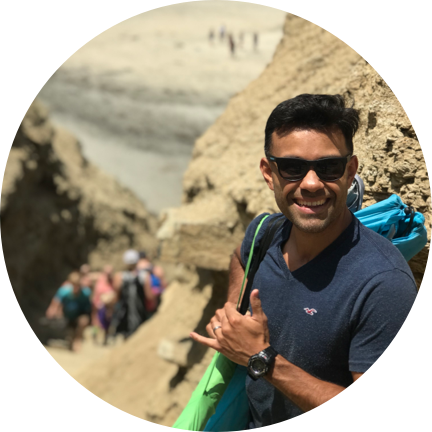 Alvaro continues to create memorable user-experiences that are both captivating and seamless during the users-journey.

Alvaro was born in Watsonville, CA in the Santa Cruz county, but “cruz”ed on over to Coachella (pre flower crown days ✌) where he spent his days growing up. After one of his best friends raved about the San Diego lifestyle he transferred to San Diego State University and the rest is history. Following a love and profound understanding of the philosophy of design, he graduated with a Bachelors of Arts in Applied Arts & Sciences with an Emphasis in Graphic Design. While his passion for visual branding brought him to San Diego, the weather made him stay.

He was initially brought onto the team as a graphic design intern, and has since mastered his craft as one of the company's valued veterans. With seven years under his belt, he still says his favorite part of coming to work is getting the opportunity to learn something new every day. It never feels stagnant, especially working alongside his co-workers. If you ever need to find him in the office? Just follow his breadcrumb of stickers. As a huge advocate of branding, you shouldn't be surprised to find he has a collection of hundreds of logo stickers and visual inspo at his desk.

When he’s outside the office, you can expect to find Alvaro working. Working out that is. Health and fitness are interests he has always been passionate about so you can bet he takes advantage of exploring San Diego, trekking on hikes, and hitting up the beach. And while he may not have jazz hands, if you give him control of the office music you better believe that’s what he’ll play. A little fun fact people might not know about Alvaro is his artistic spark was initially ignited through an appreciation of street style graffiti.