Jesse’s equally creative and numerical “out of the box” thinking helps him create valuable data analysis and strategic recommendations for his clients. 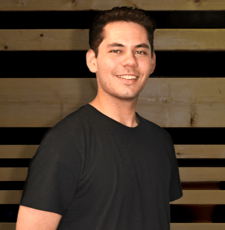 A true west coast native, Jesse was born and raised in sunny San Diego, CA, where he grew into his sea legs soon as he could walk. Being by the water has heavily influenced his lifestyle, which is why he often finds it hard to live anywhere far from the water. This longing to be by the coast and be near his family guided him to attend San Diego State University where he graduated with his Bachelor’s of Science in Marketing.

His previous internships focused more on financial advising, which he quickly learned did not stimulate his love for the arts. Therefore, he began gravitating towards digital marketing because he saw it as the perfect balance between data analysis and creative thinking. That being said, he considers digital marketing to be the future of consumer marketing. During his last year at SDSU, Jesse found his way to Campaign Creators where he began an internship on the internal marketing team, eventually becoming an integral part of the team as our now, junior marketing technologist. He loves coming into work everyday because of the innovative, open environment, working alongside a collective group where we can all bounce our ideas off each other.

If Jesse’s not at work, 90% of the time you’ll find him at the nearest beach, either swimming, surfing, or cliff diving. He’s his happiest when surrounded by water or in nature, so anything dealing with the outdoors or hiking is right up his alley. Something many people don’t know about Jesse is he lives a double life as a secret agent. Just kidding. But he does spend a large amount of time toggling between San Diego and London. He fell in love with the city back when he studied abroad and now, has an appreciation for solo traveling, having been to several countries by himself. In fact, he’s been to more European countries than states in the U.S. Fancy that.